Thanks to a successful balneology, rich cultural, social and sports facilities and, last but not least, to a beautiful environment, Luhačovice became a sought-after summer resort where not only health is restored, but one can pleasantly rest and relax hearing to the gurgling sound of springs and quiet singing of fountains.

The biggest Moravian spa is situated about 15 km southeast of Zlín on the Horní Olšava River at the altitude 250 m above sea level. Luhačovice is not renowned with mineral springs only, but with favourable climatic conditions as well. Clear skies prevail from March to October, with the best weather setting in by the end of summer and early autumn. The winters are short and mild.

Although the spa lies actually in lowlands, its climate is rather of submontane character.

Deep and mostly mixed forests invite you to take pleasant walks, with quite well-blazed hiking trails. The spa setting also includes well-arranged and decorated parks and fountains. The best known is the Brussels Fountain by Jan Kavan. The latest built fountain is from 2000 and adorns a roundabout crossing at the 28th October Square.

The Horní Olšava region was known to men living here about 30,000 year ago. As early as the primeval hunter-gatherers were likely to know about and intentionally sought for the local healing springs.

The first written reference about Luhačovice comes from 1412. The local region was comparatively poor and inhabitants suffered under frequent incursions of Turks, Tartars and Hungarian Kuruks. Possession of the local feudal domain changed owners until 1629. In this year the domain came into possession of the Hungarian nobility of Serenyi family. They discovered the riches in form of mineral springs and gradually set about improving and developing the spa. However, by the beginning of the 20th century, the Counts’ family’s assets couldn’t cope with expenses and the spa was in peril of stagnation and decline. It was at this juncture that MUDr. František Veselý, who was going to set up a join stock company, came to Luhačovice, and this entailed a huge upswing of the Luhačovice spa.

It was above all the local mineral springs that contributed the fact that Luhačovice, though relatively small in area, ranks among the best known spas. The mineral waters that made this place best known and written in the hearts and minds of thousands of people, children and adults alike, are mostly Vincentka, Ottovka and Aloiska springs.

The local healing springs are regarded as the most efficacious in Europe, not only for their high mineral content, but also for their excellent gas saturation. There are 16 hydro-carbonate-chloride-sodium acidulous waters used in the spa and one is a sulphur spring. Springs contain sodium, potassium, calcium, magnesium, iron, manganese, copper, strontium, aluminium, iodine, lithium, barium, fluorine, boron, beryllium, silver, nickel, tin, titanium and zinc. Some springs are freely accessible for the public, namely Vincentka, Ottovka, Aloiska, dr. Šťastného and St. Joseph springs, others, for instance Amandka, Janovka, Elektra, Jubilejní, Sirný and Jaroslava, are used for baths and inhalation in spa facilities.

To console the ill, to cheer the healthy” this inscription is written at one of the local springs dating back to the beginning of the last century, which characterizes the local spa up till now.

The reposeful setting of Luhačovice Spa is ideal not only for spa guests, but also for recreation and relaxing of visitors and tourists. Modern hotels, offering a wide range of services and special stays for various groups of inhabitants and, on the contrary, almost a family-like atmosphere of guest houses, all that offers a choice even to the most pretentious clients. Spacious congress halls, rich offer of accommodation, catering and other services amid a charming nature setting, have predestined this town for hosting different conferences, get-togethers and official corporate functions.

Visitors have several alternatives of spending their free time. Admirers of culture will decidedly visit the Spa Theatre (Lázeňské divadlo) where an interesting programme would be prepared for them, both in the sphere of music and drama. Concerts given by personages of entertainment and popular music are prepared each year by MěDk Elektra. Dancing, colonnade concerts, dulcimer or accordion sessions contribute to offering the variety of cultural programmes. Friends of art may find inspiration in mysterious park nooks with fountains and sculptures, as well as many notable painters and photographers did, eg. Antonín Slavíček, Joža Úprka, Zdeňka Vorlová,Otto Otmar, František Pečinka, Jiří Pacák, but they may also visit local art galleries and expositions.

Lovers of silence and serenity will find a rest in the picturesque forest surroundings. Sportsmen and people preferring active recreation may go in for hiking, cycling, swimming, volleyball, tennis, mini-golf and horse riding. A lending office hiring boats and sports equipment can be found on the lake about 2 km away from the town. The town also offers a rich variety of indoor swimming pools, fit centres, relaxation and reconditioning studies and saunas to dispose of free time when weather is unfavourable. A novelty is a sports hall equipped with bowling which will even satisfy the needs of top sportsmen. Knowledge and recognition can be found in the Museum of Luhačovice Zálesí (Luhacovice Tramontane).

Travellers and those who dislike spending their free time at one spot will welcome excursions to the environs. Local travel agencies offer half-day and full-day guided trips to the near and more faraway environs. Chateau Lešná near Zlín, Baťa canal, Vizovice, Kroměříž, Hostýn, Rožnov pod Radhoštěm, these are destinations of short one-day trips in own cars, by coaches and/or cycling tours for bikers.

Indeed, a long list would have to be drawn up by everyone who would want to record all those who used to stay here, either those boasting names of renown or simple ones. Luhačovice Spa captivated all so much that some remained here for good, or they return regularly, though some in memories only.

Maybe the most renowned visitor of this place, who returned here for twenty five times altogether, was the world-acclaimed composer, Leoš Janáček. Luhačovice captivated him, the locality became a significant inspiration to him. Here was the origin of the Glagolitic Mass, a part of the Sly Little Vixen opera. The setting of the spa colonnade is the place of the fourth act of the Fate opera. In honour of this giant of our music, Luhačovice holds regularly the music festival “Janáček and Luhačovice”. Many composers and singers took part here in the course years. To name but a few, they were Josef Such, Taker Ostrčil, Jaroslav Kvapil, Libuše Domanínska, Marie Podvalova. From among noteworthy drama actors, practically all personalities performed here one time or another. The name as Jaroslav Vojta, Oldřich Nový, Vladimír Menšík, Jiřina Jirásková and others occurred regularly on posters offering cultural programmes.

Also, the masters of word used to come to Luhačovice regularly to find inspiration. František Kožík wrote even two of his novels directly about personages who lived here. Fascinated by the personality of Leoš Janáček, he first wrote his novel “Along an overgrown footpath” and later, as a theme of his work, he discovered the founder of the local joint stock company, Dr. Vesely, whom he perpetuated in his book “Conjuror from the Vila under Linden”. Besides this, men of letters meet here regularly at the International Meeting of Writers.

Aside of the festival “Janáček and Luhačovice”, the town hosts the “International Festival of Children’s Ensembles” and the “Theatrical Luhačovice” festival. The opening of springs makes also a significant feature here.

Luhačovice is certainly no large city, the town has no world-renowned monument or memorial, however, it has something what people who live here are aware of after a longer time spent elsewhere, something what a visitor no doubt feels, but is not able to give a name to. How to call it? Magic, magical virtue, unification of man and nature, the mystery of quiescence? Whatever we call it, Luhačovice undoubtedly belongs to the localities that hold us all spellbound somehow.

A Slovak architect, Dušan Jurkovič, conceptualized and built buildings here at the beginning of 20th century, which have left vestiges of their irresistible charm in Luhačovice. His buildings do not encroach on the surrounding nature, but become its part and simultaneously serve to people for whom they were intended. The Jurkovič House and the Sun Bath rank among the world unique features. Other famous architects also followed in his steps in building the town’s dominants, to which testifies the B. Smetana House built in 1909 designed by the architect Králík, the building of the Spa Theatre by the architect Skopalík or the tennis courts premises with the Ottovka spring by the architect Skřivánek.

Shortly after the war stagnation, the town witnessed a construction development and architects B. Fuchs, J.L. Holz and the Kuba brothers continued erecting new buildings and residential quarters. World War II put a stop to the development and guest houses and hotels were used by Germans. After the liberation the grandiose Spa Square was built with the Vincentka Spring Hall and the development continued up till nowadays. The newly built dominating features of the town include the church of the Holy Family designed by architects Michal Brixi and Petr Franta, sanatorium Miramare by the architect Hanulíka, the roundabout crossing and new sports hall.

Beautiful natural scenery and delicious air fragrant with essences from the surrounding wood in conjunction with the healing powers of mineral springs and modern services. In Luhačovice everyone can admire, discover and find something. The town of Luhačovice invites you to a visit and is prepared to featherbed you in all aspects. 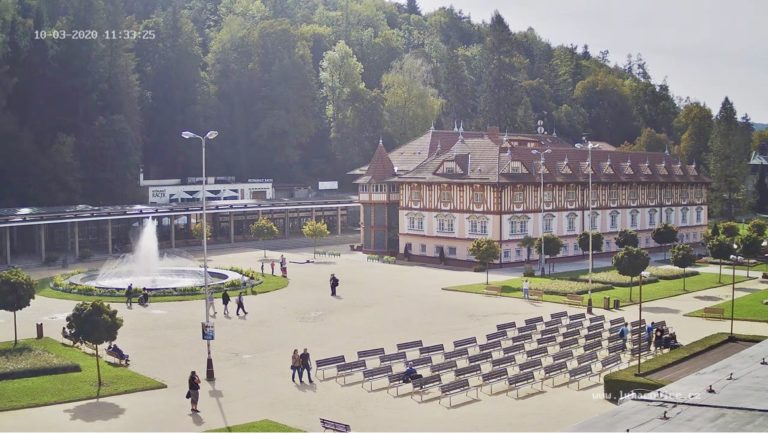 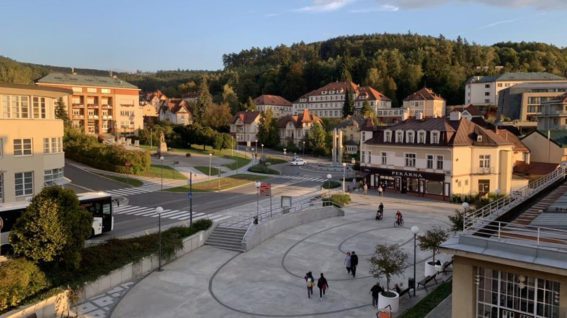 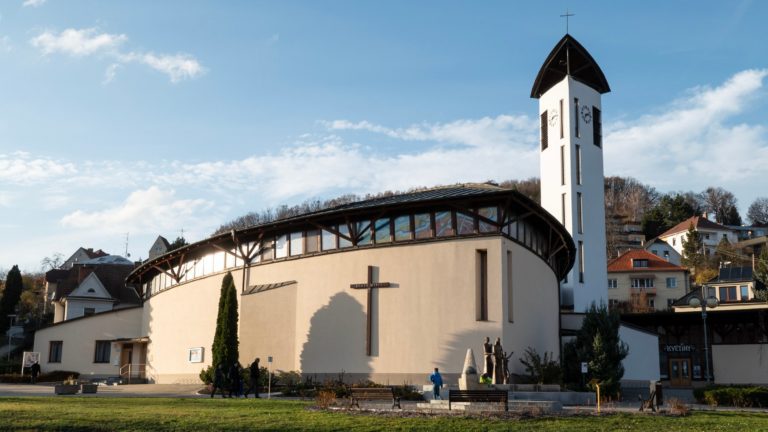